I’ve made four Darth Papers, but I can’t decide which is better. Help?
The first one was my original one, but I was unhappy with how small the pleated section is. That’s what started this whole thing.
The second one is quite good, in my opinion, but it’s folded a bit awkwardly, so I made a third one…..
The third one is also quite well (Heck, i’d go as far to say that it was better than the second one), but there’s one problem: Due to it’s large size, it doesn’t exactly fit in with my other origami characters.
And the forth one was more than sub par, if you know what i’m saying.. I don’t know WHAT I was thinking giving it those huge bug-eyes and the tiny pleat, but whatever.
Anyway, I want you all to vote on this: Which darth paper is best?

Say ”Stooky” for the first one, ”FizzPop” for the second one, ”Waffle-Tastic!” for the third, and ”Epic!” for the fourth one. (They are numbered from left to right as seen in the picture) 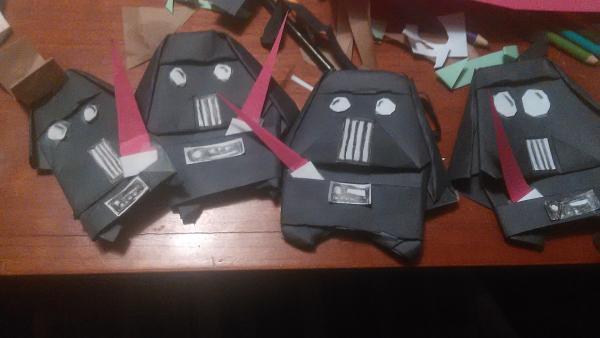