To celebrate Daily Ewok #50, (and to be a part of the showcase), we’ve started a new series called Special Edition Ewok! From now on, for every showcase on the site, a new Special Edition Ewok will be released that somehow relates to it. Since this showcase is for videogame characters, it seemed like a no-brainer to make a Mario ewok! Technically, his name is Marco, but he insists that everyone calls him by his favorite virtual hero. Marco’s obsession with Mario started during the Battle of Endor. While the rebel strike team was fighting the forest troopers, Marco snuck off into the shield generator. Inside, he found the living quarters for the guards, and some of their personal items. Marco swiped an interesting-looking machine, which he later found out was a classic videogame system: the SNES. Ever since then, he’s been playing the games on it nonstop. His favorite, of course, is Super Mario. Marco has really gotten into the sprit of the game, he found himself a hat and overalls tgat look like his favorite Italian plumber’s, and even asked Mark (see Daily Ewok #43) to make him his own Mario-style goofy glasses! Unfortunately, Marco has spent so much time obsessing over the game, he’s forgotten the other important parts of his life. He hardly talks to his friends anymore, totally ignores his chores, stays awake for long hours (see Daily Ewok #12), and sometimes even skips meals! Marco has not yet mastered playing videogames in moderation. Maybe, when he masters the Bowser’s castle boss level, he can start working on mastering taking more breaks! 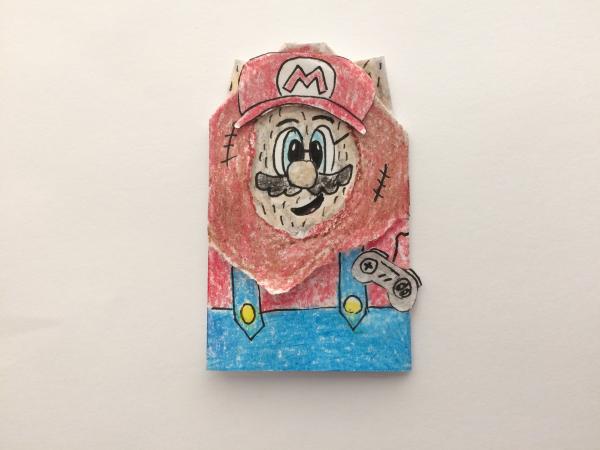