Hey everyone, this is a post about Harvey. Nobody seems to have spoken about Harvey, and I think it’s about time someone did.

I would like you to know that while many people have used you as a negative person, I know there’s more to you than that.

The sayings make me sad. “Being a Harvey”; “Found a HARVEY on the site? Click here.”

But dear Harvey, I know that it’s what is on the inside that counts. You are constantly shown as a good person— at the end of Darth Paper Strikes Back, at the near end of the Secret of the Fortune Wookiee, and of course at the end of Emperor Pickletine Rides the Bus.

It must be sad that your crush doesn’t like you. After all, you had liked Sara since the very beginning. I had finally realized that by the Secret of the Fortune Wookiee.

And Harvey, if you are reading this, which I have a feeling you might actually be, (Sam, could you make sure Harvey does? If you don’t know who he is in real life, ask Tom. He knows— he created the character in more than one way.) I want you to know that no matter what you did in middle school or any time, I believe one hundred percent that you are a good person.

Once on this site, someone named themselves after you and said you were their favorite character. The SFs were all over that person before they had thought about who Harvey really was.

Harvey is a complicated character. But he’s good. I know it. And, as those slight glances in those drawn pictures may show, there’s much more to him than you might suspect.

And you may notice that someone will always be glancing back.

I’m behind you Harvey. May the Force be with you. 🙂 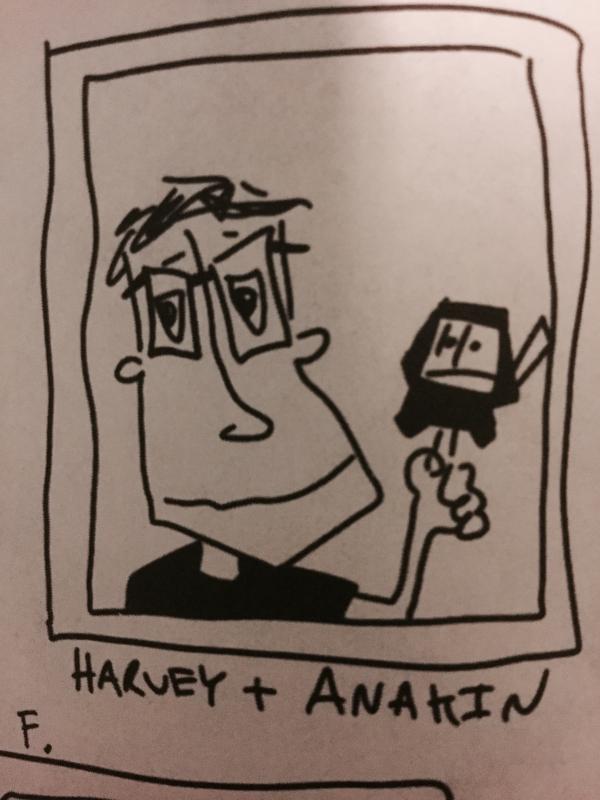