You’ve never met a clean freak as obsessed as Paul. He’s the one ewok who’s actually embarrassed to be an ewok. Apparently, the species is “too dirty” to suit Paul’s tastes. To fix this, he frequently cleans himself, tries to clean anyone else he can, and “protects” himself from anyone who won’t let him bathe them in a vat of lye soap and bleach their clothes, which is pretty much everyone. Paul’s “germ mask” is very important to him, as is the bottle of bleach he carries around virtually everywhere. His hood is blinding white due to constant bleachings, and Paul himself is always on the lookout for “contaminated” ewoks. He won’t get within a mile of Smudge (see Daily Ewok #15), Gerald (see Daily Ewok #36), or Percy (see Daily Ewok #77) because Paul is afraid they might “destroy” his “aura of cleanliness”, whatever that is. Obviously, being this obsessed about anything isn’t very healthy for an ewok, but Paul has been doing this for so long, it’s almost impossible to get him to change things. All of Paul’s friends have tried several times to convince him into breathing fresh air that isn’t filtered through a mask or only bleaching his clothes once a day, but everything goes in one ear, and goes out the other. The only way anyone can think of to change Paul’s mind is hypnotism, and no one has seen the mysterious figure in the woods since they put Jeremiah in that trance. So as much as everyone would like to stop Paul’s clean freak habits, it’s probably not going to happen anytime soon. Oh well. He’s not hurting anyone, Paul’s just really really REALLY annoying! 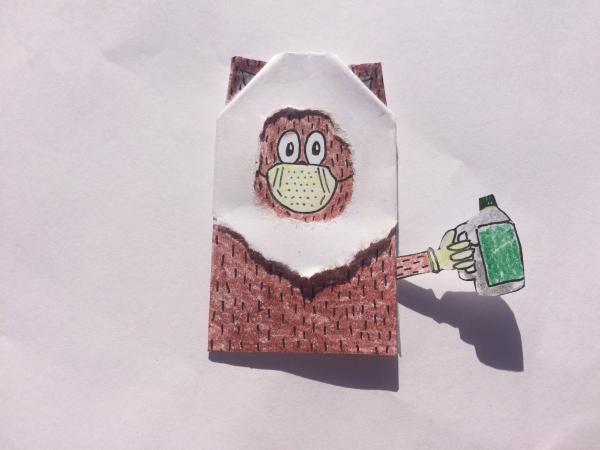