If there’s an opportunity to make money, Lucas here is going to jump at it. Now, ewoks don’t normally use money, they can function pretty well just by grunting Ewokese and poking stuff with spears. However, Lucas isn’t like other ewoks. He doesn’t hunt or climb trees, and he doesn’t even live on Endor! Like Graham (see Daily Ewok #50), Lucas somehow hitched a ride away from the forest moon, and to the bustling metropolis planet, Coruscant. Here he can buy low, sell high, and fulfill all of his businessman dreams. Lucas has actually acquired a lot of galactic credits like this, but he’s also acquired a sense of greed. Making money is the only thing Lucas cares about, and he doesn’t care how he does it. He hasn’t gone as far as to swindle credits illegally, but it may soon come to that. This little Scrooge of an ewok needs a taste of his own medicine. One day, when the Coruscant market crashes, (perhaps during an intergalactic war), Lucas may lose money. A lot of money. When he gets this blast of reality, hopefully he will realize how selfish he’s been, and that money can’t buy happiness. Or… knowing Lucas, he may try to make it all back by being even more greedy. But, fingers crossed, let’s hope the lesson he learns is a positive one! 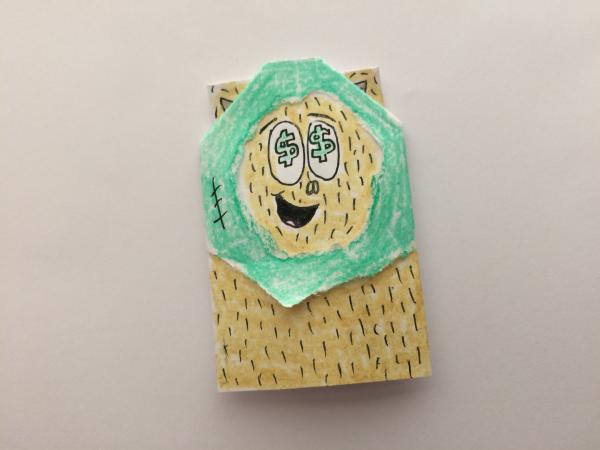