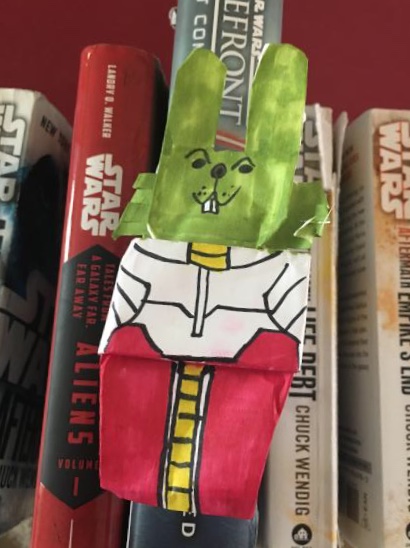 I, Jaxxon the Star Wars Rabbit — folded above by SF OrigamiFire9 — have not brought you any eggs! What am I? A Mynock?????

But I have picked out my favorite new origami from your recent posts! Scroll on to see it and read my brilliant comments about it!

And if you want to fold me yourself, click here. but remember, I’m GREEN!!!!!!

This took a looong time to make, and I had to do this 3 times to get it right! The horns are a bit tricky but you can get it right. 3 stookys and I will post instructions.

JAXXON SAYS: That’s a good looking Maul!!! I’m going to go ahead and give you all three stookies, because I want those instructions!

Hey everyone! Origami_Master53 here! I have made a KIRIgami Red X! (The Kirigami bit is the belt… I messed up so I cut out a strip of paper and then glued it on lol) But anyway it is just a standard Doodle-gami puppet so no instructions. -Origami_Master53

JAXXON SAYS: It’s my old pal, Red X! You know, I helped him get ahold of that Zynothium, right?

Han Solo is one of my first Origami puppets. But he have some pockets in his jacket. Thats really easy to make because you have only to take a big blacke stripe of paper and glue only the ends. So you have little pockets. Can somebody send a instrux for Cham Syndulla?

JAXXON SAYS: Han Foldo, eh? That guy still owes me money from that job we did on Aduba 3! What? He says he paid me in full? Hardly.

I can make easy mandos, from show or creative, if it gets 10 stookys ill post instrux

-Pssssst, I, Jaxxon the Star Wars Rabbit, officially give you the 10 stookies

A pencil suit?, no not a pencil tux, but something to put on your pencil it looks like this

I need one of those pencil suits! All my pens and pencils get cold while I’m hibernating.

So ya. This was made a month ago I for some reason I still haven’t posted it…but here you go! (don’t ask for instructions this was really hard to fold!)

JAXXON SAYS: Wow, that is some quality detail work! How about making me a jacket like that. I get cold while hibernating, too!

this i made with glue and tape and scrap paper. 5 stookys for instrux

JAXXON SAYS: That Embo is so good, it’s scary. I mean I’m seriously scared: Embo has almost clobbered me with that hat of his before! That was a close one!

10 STOOKYS for instructions or you can just make one yourself,enjoy!

Jaxxon says: Cool, they are flying upside down! Just like I did in the battle of Tibbar 5! 10 stookies! Gimme those instrux, human!

This is my origami hondo puppet. I was inspired by Star Wars galaxy’s edge to do this.

I bet you can figure The instructions for yourself. They are SUPER easy! Comment STOOKY if the 1st helmet is better and WAFFLE TASTIC if the 2nd one is better. Enjoy!

Jaxxon says: i LIKE THEM BOTH,but I’m going to go with Waffletastic.

Here is my origami blastoise. I made his cannons with squash folds, and I taped on his arm.
I also have my painting of a poster for a Pokémon battle, featuring my favorite Pokémon, Lucario.

WOW! Your artwork is so stooky!!! Maybe you will paint me, Jaxxon The Star Wars Rabbit, some day!