Origami Yoda has some good advice for these troubled times… 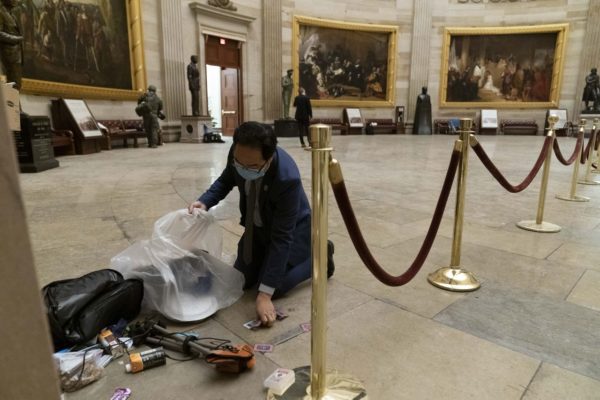 SFs…. A LOT has happened lately. Crazy stuff most of us thought could never happen in our nation’s Capitol. But it did and you probably don’t need me to go over all of it. We all saw it.

But I wanted to draw your attention to one particular photo. It’s an AP photo by Andrew Harnik, showing Congressman Andy Kim on his hands and knees picking up trash left behind by the mob that stormed the capitol.

It reminded me of what may be Origami Yoda’s best piece of advice ever.

Remember when Origami Yoda* tells Mike to stop slacking off and dodging work at his church youth group and instead volunteer for the hardest job of all: washing dishes. That was good advice for Mike… and for Andy Kim.

Although clearly Congressman Kim didn’t need Origami Yoda to tell him. He already knew! Look at him picking up all that junk! That’s not his job. He didn’t have to do it. He wasn’t even asked to do it. He WANTED to help.

This country is so messed up right now… and yet so many people are still trying to avoid helping. They won’t even wear a mask even though they’re told every day that it would HELP stop the virus.

You’ve got to decide what kind of person you’re going to be. The kind who cleans up a mess…. or the kind who makes a mess worse.

Well, you know what Origami yoda would say:

And if we do, I think we will learn the lesson that Mike learned: pitching in and helping is a POSITIVE thing. Helping out — whether it’s wearing a mask or cleaning up the U.S. Capitol — helps other people, but it also helps us, too. It helps us see hope and change and better times ahead. And when we get there, we’ll know that we were part of making it happen.

I’d like to thank Congressman Kim for showing us this in real life! What do you say we make him an Honorary Superfolder?

*Harvey’s note: uh… it wasn’t Origami Yoda it was the Fortune Wookiee!!! Haven’t you read your own books, Tom? Mike asks Sara to ask the Fortune Wookiee how he can get out of helping out and the answer is: “A Wookiee takes the hardest job and does it well.”