Talk to Tom …. including “Will there be more OY books?” 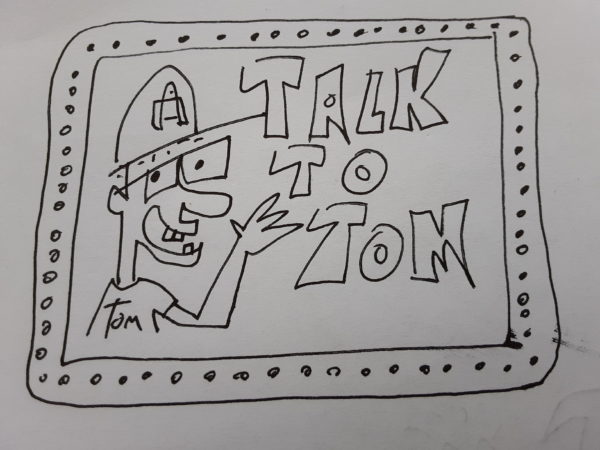 hi. i made these book covers (search “Hey SFs” under my account name to find it. ) and i was wondering if you could choose one of the characters and fold your own version of it, then make instrux? thanks!

TOM: Hey, those book covers are really cool! I do need to make a Ki-Adi-Mundi one of these days. So far I think I’ve only ever drawn him. Let me see what I can do…

Good day Mr Angleberger!
Are you going to post any cool and awesome origami instructions for this force Friday?

TOM: Sorry, SFG, but I don’t have anything new to post… unless I can get Ki-Adi-Mundi figured out in time! (see above)

Before I knew about this website,I was sombody with a love of books.And when I first saw this book,I glanced at it,and walked away.A few days later,I walked past it again,and I could not help myself,I picked it up and started reading.Instinsly,I was pulled into a world where there was a good yoda voice,a bad yoda voice.Right after I finished the book,I could not wait to fold.At the moment I finished reading,My mom got her reciept and gave it to me ,and in five secons flat I was trying to figure out yoda.So I would like to say,Thank you to Tom angleberger the best star wars aurthor ever.

TOM: Thanks, Yodamaker765! I’m glad you gave me a second glance!

I was wondering… how do you make the REAL Cover Yoda? …and that lightsaber pretty cool

TOM: Well, the lightsaber was made with photoshop! But the REAL cover Yoda was made by me, sitting at my kitchen counter. If you’ve heard this story before, you know what comes next: I did not record my steps as I went. And when I was done, I was afraid to unfold it! So I do not know how to do it!!!!!

I’ve made a Youtube video about this and discussed some details, but some SFS have made pretty good videos and instrux of their own!

How come in jabba the puppet it says that Quavondo’s sister was part of the rebellion but in princess label maker it says she hadn’t joined ?

TOM: SF Mynamejeff, you’re good!!! If this was a Marvel comic, you’d win their famous No-Prize!

Here’s what really happened: Quavondo’s sister signed up in the early excitement, but didn’t really want to spend any extra time with her brother, so she never really participated in all of it. Don’t worry: in high school, she’s going to become a real REBEL LEADER… but she just wasn’t that interested in doing what her brother was doing.

which origami yoda book is your favorite? honestly, i would choose either princess labelmaker or emperor pickletine.

TOM: SO hard for me to pick! For me the whole thing was one wild ride! But the best moment, during the whole wild ride was getting an email from my editor that said LucasFilm said YES! Wow! I felt like Lando and Nien Nunb felt after blowing up the Death Star!!! YEEEEEHA!

So, in that way, I sort of have to go with Origami Yoda…. The book that changed my life!

Hey Tom,
I’ve read the Origami Yoda series, like, 4 times all the way through. I really like it. I know you probably get asked this a lot, but I’m really, REALLY wanting a next book. Or a secondary series. Or SOMETHING! If something like this already exists, please tell me. Because I really want more Origami Yoda. Also, I came up with a stooky Cover Yoda if you want to see that. PS I had to attach a photo…here is a pic of chewie and han of my own design. I already submitted them though.

TOM: You weren’t the only one that asked this question. Let me tell you that it makes me SO happy to hear that Sfs want more!

And I wish I could make more. I’ve had some ideas… like how about at the end of the year, they clean out Kellen’s locker and find all these casefiles that he doodled on, but never gave back to Tommy. I even have a list of some of those “lost” casefiles. Or at least, I thought I did, right now I can’t find it!

But making new Origami Yoda books is a VERY complicated business. If I had invented Yoda myself, it would all be so simple. But as you know I didn’t. So there are lots of people who have to agree to lots of things before a book gets made. Right now… we don’t all agree. There’s no reason to be mad at anybody. It just isn’t lining up right now.

So… right now there are no plans for more Origami Yoda books.

But in the future? 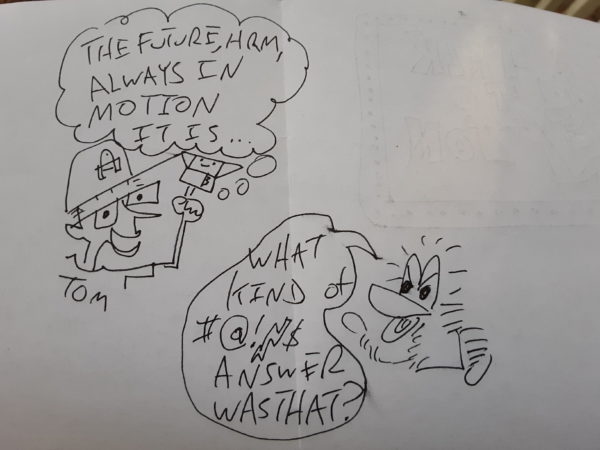