Rocket and Groot 3: The book that never was… 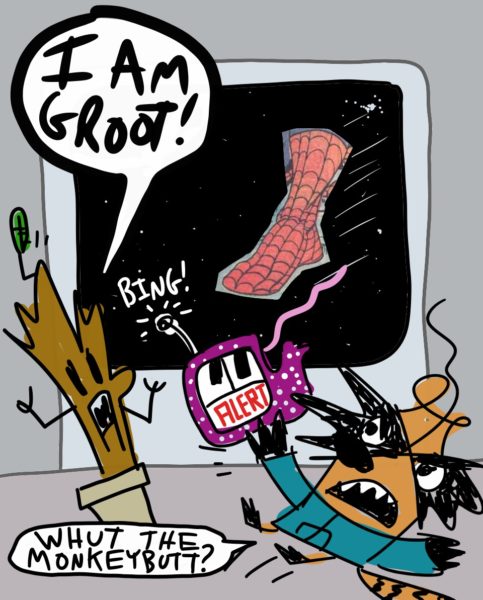 The multiverse has many universes. In most of them, I published 3 Rocket and Groot books and Book 3 was so great that I was named Best Author of All time and made president of Hawaii.

But in THIS universe, that book was never published and I’m not the Best Author of All-Time and Hawaii doesn’t even have a president.

Recently, however, a wormhole opened between the universes and the first two pages of R&G3 appeared. (Either that or I found them on my hard drive.)

So, without further ado, here are the first two pages of a book that does not exist!

After many epic battles with many epic things that battle, ROCKET AND GROOT are finally headed back to Nowhere to meet up with the other GUARDIANS OF THE GALAXY!

And they’re bringing VERONICA, the galaxy’s most dangerous tape dispenser, with them!

Wait, actually, she’s bringing them, since she’s the one piloting their small but awesome spaceship, the Rakk’N’Ruin!

Yes, everything is just perfect! No worries at all! Nothing to see here! Might as well skip to the end, because there is no possible way for them to get into any trouble now! And whatever happens, I’m sure Spiderman’s left foot won’t have anything to do with it!

This is Captain Rocket of the starship Rakk’N’Ruin!

Also on board are Groot –

and our pilot, Veronica, the galaxy’s most dangerous tape dispenser.

Frankly, I’m getting a little worried about having the galaxy’s most dangerous tape dispenser as the pilot of this ship, but right now I’m ready to get back to Nowhere and join the other Guardians of the Galaxy as soon as possible!

BING We should reach our destination in 4 hours.

BING unless we run into a giant space-robot shaped like Spiderman’s left foot.

WHAT THE MONKEY BUTT? Why would you even say something like that? I mean what are the chances of running into a giant space-robot  shaped like Spiderman’s left-foot?

100 percent? You must have made a mistake! I mean just look out the window and you can see that there’s no chance of us running into–

You see WHAT out the window?

[Sound of furry woodland creature banging his head against the wall.]

WHY? Why does this stuff keep happening to us????

Aren’t you going to do one of your crazy reckless screeching U-turns that slams me and Groot against the walls because we’re not wearing seat belts?

BING Nope. But it was fun! Want me to do it again?

TO BE CONTINUED? (answer: not in this universe)