TALK TO TOM round 1

HEY Sfs!!! Here’s the first batch of Q&A. Stay tuned for more AND for the MegaDoodle. If you haven’t asked your question or submitted your request yet… submit it now with the headline Talk To Tom 2018.

Ok, we’re going to start with THE BIG ONE:

SuperFolder Entity303
Hey! for my question, i have one that a lot of people are probably going to ask. i want a straight answer, though(and not yardstickAre you going to make any more Origami Yoda books? whether it be a new story in a different time or different place, or a different main character, i would very much like to know!

TOM: For a long time, I did not have an answer myself. But now I do!!!
BUT…. I’m not really supposed to tell anyone yet.
However, the fact that there’s something I’m not supposed to tell, may tell you something!!!!

-=-=-=-=-=-=-
SuperFolder Embo: Can you make Ahsoka instrux?
TOM: I’m surprised to find out that I’ve never made them! But, since SF Sky Lukewalker made terrific instructions 4 years ago, I’ll just post his here. I think it’s fair to call these the definitive EZ Ahsoka Instrux. Kellen couldn’t have done it better… 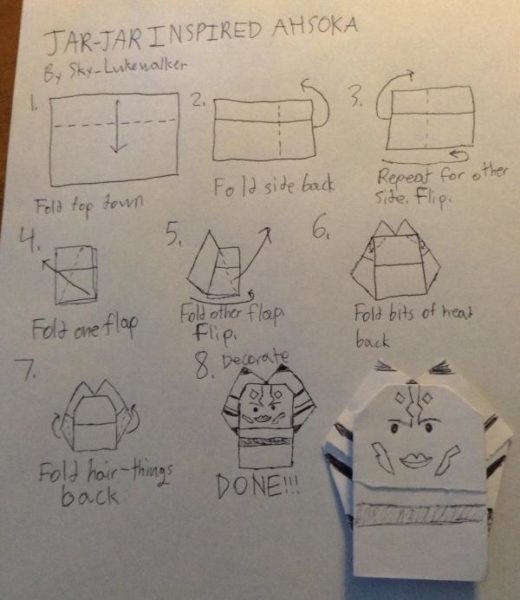 TOM: You mean “Mission of the Rebel-Gami Troopers?” That was STOOKY!!! (or should I say STOOKIE?)

-=-=-=-=-
SuperFolder Glorfindel
Hi, Mr. Angleberger.
I have a request/question.
Recently I put up a post announcing that I was starting work on an Origami Yoda anthology story. I was wondering two things:
1. I’m using Google Docs to type it, and I would like your help formatting it like the canon OY books.
2. I would like to share it with you, but I can’t figure out how to email it to you (I tried emailing the publishing company with instructions to forward it to you, but they paid me no attention)

TOM: Glorfindel! I like your SF name!
My answers are not going to be so great, though. Google Docs is not the same software the publisher used to lay out the text, so it’s never going to look quite the same. About the best you an do is to give yourself some big margins so Kellen has room to draw.
Secondly, it would be best if you did not email me your ideas. I try not to read other people’s Origami Yoda ideas, because once I’ve read your idea, that means it will never be my idea and I can never use it myself.
BUT I definitely encourage you to keep making your own Origami Yoda stories!

SuperFolder SF_Mega3
Hi Tom!
I recently found out that you’re a fan of tokusatsu shows like Kamen Rider, Ultraman, and the old Godzilla movies! What would you say are your favorite tokusatsu shows or movies, Tom?

TOM: It’s hard to pick between Ultraman and Kamen Rider. I love Ultraman’s monsters! But I also love Kamen Rider’s whole insectoid look, especially V3.
As for Godzilla, I’ll go with Godzilla vs Megalon because of the appearance of Jet Jaguar! (That’s him up top!)

SuperFolder R2_Ski2
Hi it’s SF R2_Ski2. I have a question for you. Have you seen Star Wars Resistance yet. We should do a showcase about it. It has a lot of new and old great characters.

TOM: I haven’t seen it yet! I don’t think I get the right channel, etc… But I agree about the showcase! Let’s do it soon!!!

SuperFolder Lubensuper
·Why didn’t we do a showcase on remembering Stan Lee?

TOM: ANOTHER great showcase idea!! Stan Lee definitely deserves a Showcase! Maybe I’ll get one started so Sfs can make origami over their breaks….

SF CAMMY: I desperately have wondered the answer to this question since I became an SF. What is your favorite brand of toothpaste?

TOM: If you’ve really been wondering for that long… and it’s been a LONG time … maybe I’ll tell you. As you know this has always been top secret … just as a joke, though. And maybe it’s finally time to deliver the punchline: