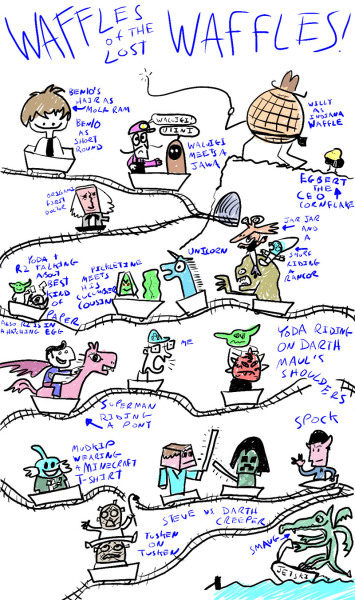 Hey SFs! That thing up there is a MegaDoodle, the sort of thing we used to do on this site when commenting was allowed.

I miss the Megadoodle! So, let’s make a new one! We’re going to use a poll form to avoid the commenting problems.

If you’ve never been part of this before, it’s simple: You tell me what to draw, I draw it!

Not just Star Wars stuff! As you can see above, I’ll try drawing almost anything!

(But I can’t draw everything. I may have to pick and choose. So submit more than 1 idea if you want!)

One more thing, don’t submit 50 things in one, like: an eagle eating french fries while flying over NYC in the summer during a thunder storm caused by Zeus who is made about….

Keep it simple, like: Dipper barfing or a unicorn on a motorcycle.

Click here to enter your idea in a poll style form…