How I design an origami character… starring Groo!

People sometimes ask me how I make up a design for an origami character.

Well, it’s not magic, it’s experimenting until I get a start, then refolding and redecorating until I come up with something that works.

Recently, I had the great luck to meet Sergio Aragones at ComicCon. Sergio is the amazing artist who makes the tiny doodles that are often the best part of MAD magazine. He also has this crazy comic book character GROO, who is sort of a bumbling barbarian.

I told Sergio I might try making a Groo and he was very enthusiastic (and even gave me some tips).

So…. First I looked at Groo and saw how triangular he was…

Also, I was just going to draw the arms on, but when I realized just how big they are, I knew they would have to be folded, too. So my first try — with green practice paper — was a very wide triangle with big arms. I liked it, but the width made his face look funny.

So I folded it again, a little narrower this time. I also added a double-pleat for his belt, which had the nice effect of giving me Groo’s arm guard’s too!

So now I decided to try to make a final version with white paper and decorate it. The result was… not quite right.

So I made a fourth (or possibly fifth) version which I liked…. and so did Sergio!!! (Or at least he was nice enough to pretend that he did!) 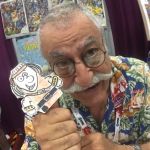