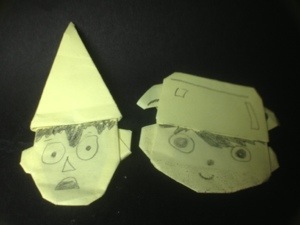 UPDATE — We’ve had some amazing submissions, BUT also some by people who obviously did not read or understand the instructions. This is not a showcase for Star Wars origami. (Unless it’s Rebels.) It is for NEW stuff you are interested in, such as Big Hero 6. Korra or Over the Garden Wall.

And as always YOU MUST SUBMIT WITH THE CODE WORD OR SAM WILL NOT SEE IT IN TIME!!!!!! THe codeword is WHAT’SNEW

Here’s a little weekend project for you.

Fold the origami version of some NEW piece of entertianment you’re enjoying…. It could be The Long Haul, Big Hero 6, the new Justin Beiber Christmas song.*

Right now, I’m super excited about Over the Garden Wall. This picture shows a couple of preliminary folds of Wirt and Greg. I might get some red and gray paper and try to fold them up proper….

Just fold whatever’s new and stooky for you right now! (A future Showcase is going to be CLASSIC stuff, all pre-Star Wars!)

The only limit: Let’s keep it to G and PG rated stuff, please.

So… spend the weekend folding and decorating and SUBMIT IT by Sunday night.

IMPORTANT: put WHAT’SNEW in the title of your submission!

*Hopefully there isn’t one…