TTT and LOTS of news about signed books, booksignings and my audiobook debut! 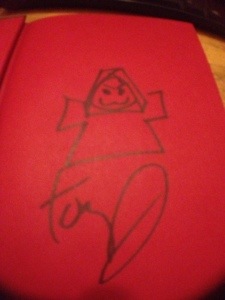 First of all, sorry if I have missed your questions or comments lately. I spent a week in NYC without a computer, but tried to stay tuned in as much as I could by phone.

What was I doing in NYC? Well… signing books for one thing. Books that you can order!

I stopped by Books of Wonder in Manhattan and signed a bunch of Emperor Pickletines and Art2D2s to go with other books I had signed there earlier this summer. This means that the store has COMPLETE SETS of SIGNED BOOKS! (And not just signed, but with drawings in EACH ONE!) AND THEY’LL SHIP THEM TO YOU!  Click here for ordering information!

What ELSE was I doing in NYC? RECORDING a book! Well, not a whole book. Just a chapter: Dwight’s chapter in Emperor Pickletine.

As you may know, RECORDED BOOKS has made audiobook versions of the entire series. They have a bunch of different voice actors to do the different characters. And they gave me the chance to be the voice of Dwight now that Dwight finally has his own chapter!!!! 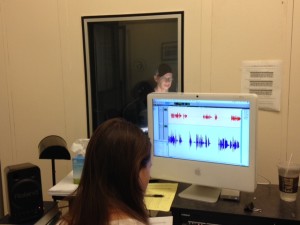 After doing the recording, I also did an interview with Mark Turetsky, the voice of Tommy. (And a good friend!)

Went to Abrams/Amulet and saw preliminary artwork for a new book  (amazing artwork!)

Went to Disney/Hyperion to meet with my Return of the Jedi editor!

And I had some fun as well.

And now I’m back and gearing up for the EMPEROR PICKLETINE book launch event on AUGUST. 22 at Imaginations toystore in Blacksburg, Va.! And then on AUGUST. 30, I’ll be at the DECATUR BOOKFEST in Atlanta! That’s always a stooky event and Cece will be there, too, to promote her new graphic novel. (Lots more about that coming soon)

And then I’ll be off on the national tour. Complete details coming soon….

Anything else you need to know? Just ask in the comments….