Meet Crash: Ewok drummer extraordinaire. He somehow got a hold of the stormtrooper helmet drums from the Battle of Endor celebration party, and transformed them into a rock drum kit. After that, things kind of snowballed. He started a band, started dressing strangely, and unfortunately, started hanging out with the wrong crowd. Crash shut out the good influences in his life to make room for the bad ones. As a result, the quality of his character, and eventually the quality of his life, dropped. Deep down, Crash knows he shouldn’t be doing the things he is doing, but surrounded by a group of ewoks doing the exact same thing, he forgets who he is and blindly follows the crowd. The one medium that Crash can express his true inner self with is the drums. When he’s laying down the rhythms, he finally remembers who he is and who he wants to become. Too bad there isn’t a way for Crash to play the self-helping drums, and avoid the self-hurting crowd at the same time. Or is there? There still is hope for Crash to find his life again without giving up his dreams of drumming. There are plenty of ewoks who enjoy music and would be more than willing to join Crash in a band. These ewoks wouldn’t be negative influences, but rather positive ones. Crash just needs to start looking for a way to escape his current life situation, and he’s likely to find one. Maybe, once it’s all over, Crash can write a song about his story, and his new band could play it. Of course, Crash would be on drums, because when it comes to rhythm, no one can BEAT him! Ba dum Crash! 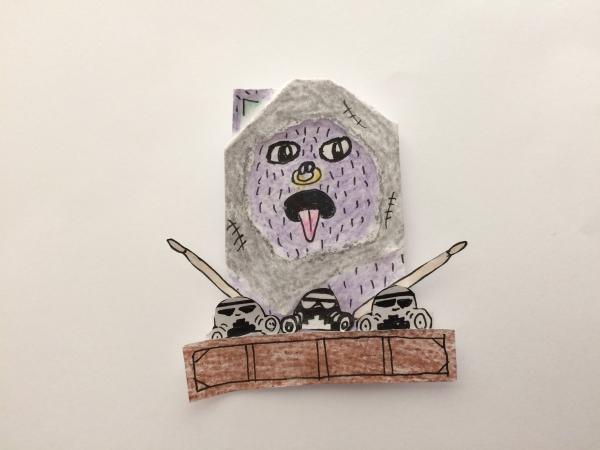